I am starting new over at chipanderson.wordpress.com.
Posted by Chip Anderson at 6:40 PM No comments:

This is What I Want

There are a lot of people who want or want to be a lot of things.  And I am no different.
Some people want power. Some people want to be famous. While others want money and to be wealthy.  I struggle with wanting these “wants” too.  But for me, I have always thought they have conflicted with my faith and the teachings of Jesus.  So, placing my faith first I am working on being humble, content and grateful.
Notice the lines above are written in the present tense.  I am “struggling.”  “I am working.” This is an almost daily battle.  But I wonder if there is not a faithful and more Christ-like way to fill these same desires.  I wonder if these desires themselves are not good and right, but that the most common avenue for satisfying these wants is misdirected and loaded with deception.
You see, if I had power, fame or money I would want to be different than most who possess these things.  Of course my view of those who have these “resources” is skewed. I often think they are exclusive or reclusive people who don’t hang out with average (or less than average) people and they are rarely generous with what they have (except for the tax breaks).  It’s as if they believe their own press releases and look to foster the hype that makes them powerful, famous or wealthy.
But instead of wanting power, fame or money, I wonder if a God honoring version of power, fame and money  isn't “influence.”
Wanting to be powerful seems inherently counter to being humble and a servant.
Wanting fame smacks of selfishness and pride.
Wanting money is greed.
But what about wanting to be influential? Is there anything wrong with that?  Is there anything anti-biblical with this desire?
Jesus was not powerful in the eyes of 1st century Palestinian cultrue. Although he had some notoriety, I would not call it "fame" per se, because most of it seems to have been mere curiosity or self-interested groupies. And certainly Jesus was anything but flush with cash.
All the while, no one would ever deny the influence he had on his disciples, Judea and the rest of the world.
One time while on Meet The Press Rick Warren, the pastor of Saddleback Church said, “The purpose of influence is to speak up for people who have no influence.” He says it here too.
Influence for the sake of others, for the sake of service  and for the sake of the Kingdom of God?
Hmmm....
This is what I want.
Posted by Chip Anderson at 8:15 PM No comments:

The Bible and Tattoos 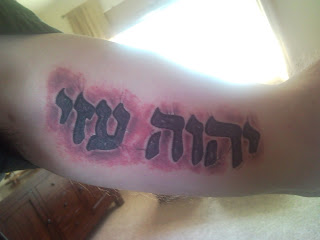 Q: “What’s the biblical view of tattoos?”
A: Tattoos have been around longer than the biblical prohibition against them. In my opinion tattoos have suffered from “guilt by association” and poor biblical understanding for generations.  At one point in American history tattoos were seen as symbols of rebellion worn only by thugs, criminals and potty mouthed sailors.  No self-respecting Christian would have ever subjected themself to tattooing because of the people or segments of the counter-culture they would have been associated with.
As it turns out, this was the very reason God told his people not to get tattoos. The only direct reference to tattoos in the Bible can be found in the Old Testament.
Leviticus 19:28 "Do not cut your bodies for the dead or put tattoo marks on yourselves. I am the Lord."
One of the main motives for God to give this command and others in the Law was to create a clear line of distinction and separation between his people (Israel) and those who were not his people (the Philistines, Canaanites, Amalekites, etc.).  God wanted his people to standout, be seen as different and separated from the cultural inhabitants around them. God wanted his people to be “holy,” (Lev.19:2) which has the meaning of being unique or separate from the common for a specific purpose.
At the time, the above command about tattoos was given because pagan cultures would cut, mark and tattoo themselves as part of funeral rites.   This was an almost universal practice.  It was a way for the people of these nations to mourn, worship and show allegiance to their gods.  Hence, the God of the Bible wanted his people to worship him and to not be mistaken for the people of their surrounding cultures.
But today the question has to be asked, “Do tattoos still have the same cultural meaning as they did in the Bible?”  With tattoos being fashion statements, tributes and a form of self-expression the answer is clearly “No.”  Marking one’s body through cutting or tattoos is not used by the culture at large in practices of mourning or worship of false gods. This leads me to believe the restriction on tattoos is culture bound and not universally applicable to today.
Now there are lots of things to think about when considering a tattoo that people should not take lightly. Here is a list of the things I considered before getting my tattoo:
Commitment (it will be with you for a life time.)
Design
Meaning
Accuracy (if it's a symbol or in a different language)
Placement
Artist
Cost
Safety
Remember, the Apostle Paul says our bodies are the temple of God (1 Cor. 3:16), so be informed and wise about how you may decorate your temple.
For further insight into tattoos and the Bible check out these links:
http://www.sacredink.net/tattoo_and_the_bible/
http://www.sacredink.net/pdf/tattoo_research.pdf
Posted by Chip Anderson at 8:21 AM 2 comments:

Psalm 103:2–5
"Praise the Lord, my soul, and forget not all his benefits:
who forgives all your sins,
heals all your diseases,
who redeems your life from the pit,
crowns you with love and compassion,
who satisfies your desires with good things…”
“Who satisfies your desires with good things…” hmmmm.  I have desires.  I have wants and perceived needs.
When they arise, where do I go to have those needs met?
What is my response to those desires?
Do I stop and reflect on the origins of these desires?
Do I ask why they have arisen or what is causing this desire to show up now?
Or do I simply find the easiest and quickest way to meet my desires?
This does not mean my desires are bad, evil or selfish. They could be, but they might not be. The desires will most likely find their way out through the poor choices I make because these are the easiest and quickest kind of choices to make.
God says in Psalm 103:5 he will meet our desires with good alternatives, not empty calorie substitutes or not with surrogates which are not in my best interest. But with those that are good, wholesome, satisfying, productive and meaningful.
He meets my short comings with his goodness. He provides what I need and offers ways, roads and directions to lead me closer to him and not away.  God offers good because he is good and he is good to us.
Posted by Chip Anderson at 8:08 AM No comments:

Here are some basic stats from Q Portland, which Jared, Brian, Phil and I attended last week:
Median Age:
37 Years Old
Channels of Cultural Influence Represented at Q:
43% Church
13% Social Sector
12% Business
11% Education
9% Media
9% Arts & Entertainment
3% Government and Politics
Lifestyle Types Represented:
49% Suburban
40% Urban/Metropolitan
9% Rural
The middle set of stats is one of the reason why the conference was so interesting and different then ones I have attended before.
Posted by Chip Anderson at 8:01 AM No comments:

Is this value added?

Or does it just continue to add to the polarization?

Bill Maher on Islam and Buring the Koran

Would you agree with Bill Maher or not?
Posted by Chip Anderson at 7:56 PM No comments: 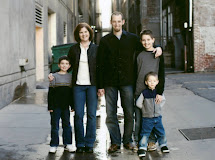 Chip Anderson
Denver, Colorado, United States
I am a poor husband, an incompetent father and mediocre preacher, but loved by Jesus all the same.